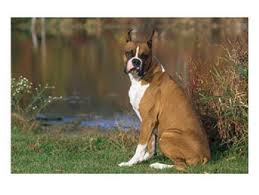 Today I find myself crying because I've re-read my Off Leash coming of age story. I think that's a good thing. I want readers to feel an emotional connection to my young boy, Jay, and to the dog, Ollie who he befriends. I wish poverty wasn't real, but it is. Now work begins on Off Limit - this book has been so hard to write I had to actually take a break from it for 2 mos because it was bothering me so much, but now I'm ready to conquer the ending - again it will have two endings - one the nitty gritty ending and the other a happier Hollywood version.
This is Ollie - the dog I had in my head when Jay needed a friend.

Below is my Off Leah query - comments appreciated.

Jay Walker is a fake. He’s hungry and confused and most of all angry. How else is a guy who has a dead beat for a mother and a sister battling cancer supposed to feel? But the world will never know. He’s determined to do it all on his own, at least until he meets Ollie, a purebred Boxer dog, and finds that when life has knocked you flat on your back and you’ve had enough, you should try telling that to a dog demanding his walk. Walking a pet – it’s just another chore. But the dog doesn’t know that – he lives in the now, embraces life to the fullest and gives his whole heart when offering love.

Off Leash is a coming of age story in which a boy experiences the nitty gritty side of life through the eyes of his dog and the horror of dog fighting and discovers that maybe, just maybe, life is with pain but worth living.

With two alternative endings, Off Leash give the reader a Hollywood happily ever after, which details the story of Jay’s life after he loses almost everything yet regains control when he’s placed in a witness protection program, and a real-life, in-your-face ending grounded in the hardest parts of reality. Here Jay copes with the loss of his mother, sister and dog, who had become his best friend, but also finds out that although sometimes life pushes you into becoming an adult way before your time, there is hope even in coping and that being sort of normal is okay.

Where are you from?