I am so excited. My good friend is launching this amazing YA book and while she's a published author, like me in another genre, this is her first venture into the Indie YA market. This book I couldn't put down. 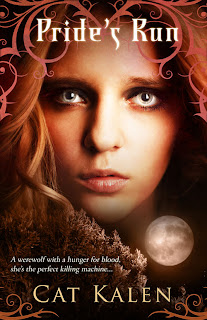 Seventeen year old Pride is a tracker—a werewolf with a hunger for blood. Taught to trick and to lure, she is the perfect killing machine.

Kept leashed in the cellar by a master who is as ruthless as he is powerful, Pride dreams of freedom, of living a normal life, but escape from the compound is near impossible and disobedience comes with a price.

When she learns her master intends to breed her she knows she has to run.

But Pride soon learns that if she is to survive in the wild, she must trust in the boy who promises her freedom, the same boy she was sent to hunt.

With life and death hanging in the balance the two find themselves on the run from the Paranormal Task Force—officers who shoot first and ask questions later—as well her master’s handlers.

Can Pride flee the man who has held her captive since birth and find sanctuary in the arms of a boy who has captured her heart? Or will her master find her first?

The click of the lock at the top of the stairwell is my only indication that morning is upon me. My ears perk up and I listen for the coming footfalls. The weight on the stairs combined with the creaking of each wooden step will let me know which handler has come for us this time, which unlucky puppet has drawn the short straw and is stuck with letting the dogs out, or in this case, the werewolves.

Sure, he’ll come sauntering down the stairs sporting a brave face and looking at me with cold, dark eyes meant to intimidate. But the wolf inside me can smell his inner fear. Despite the fact that I’m the one caged, underneath the handler’s cool, superficial shell he’s the one who’s truly afraid.

A long column of light filters down the stairs and I blink my eyes into focus as the bright rays infiltrate the pitch black cellar. I don’t really need to blink. Not with my exceptional vision. But I do it anyway because sometimes I simply like to pretend I’m a normal seventeen-year-old girl, one who can’t see in the dark. It’s nonsense, I know. I’m not fooling anyone. Least of all myself.

The door yawns wider and before the first heavy boot, soiled with old blood that he’ll pass off as wine stains, hits the top step, my senses go on high alert. I never know what morning will bring—or who will bring it.

A breeze rushes down the stairs ahead of the handler, carrying the aroma of the grand estate with it. I push past the metallic scent of dried blood to catch traces of grape juice in the air, a common smell on the majestic vineyard—that and illegal drugs, the estate’s real source of income. Going beyond those familiar fragrances, I breathe deeper and get hints of fresh bread baking in the upstairs kitchen. It must be Thursday. Mica, the estate’s cook, always bakes on Thursday.

In my human form I roll onto my side and lean toward the smell. Wistfully, my tongue darts out and brushes over my bottom lip. There is something about that scent that always entices me and before I can help it I envision myself eating a warm slice covered in rich creamy butter, crispy on the outside, moist and tender on the inside.

My nostrils widen, but I know the bread isn’t meant for me and not even one delicious crumb will pass over my dry lips. Not unless Mica sneaks it to me. As much as I’d love to taste her offerings I don’t like it when she takes chances for me. Disobedience is far too risky for the aging housekeeper. Despite that, my stomach growls in response to the aroma and I fight off the cravings. I can’t hope for bread when it’s unlikely that I’ll even be given a scrap of food today, especially if I can’t please him.

A boot hits the second step—the handlers always descend slowly—and as I stretch my legs out on my dusty mattress I hear the waking groans of Jace and Clover stirring in their own cages beside me. I glance their way, and that’s when my attention falls on the one empty cage in the cellar. My mother’s den. I breathe deep and fight off a pang of sadness that I cannot afford to feel.

I turn away from the empty cage and stare at the gray cement walls. I can’t bear to look at her den any longer. It only reminds me of how they killed her and how all the pups were forced to watch—to learn that disobedience comes with a price. Guilt and sorrow eat at me to think that she’d died trying to free me.

When step number five creaks, I diligently try to shake off the memories. The handler is close which means I can’t think about my mother right now. I push all thoughts of her aside, knowing that right now I have to think about my father and what he taught me before the master killed him. Never let them see your fear.

Before my master’s puppet even reaches the bottom step, I know it’s the one they call Lawrence, the handler I hate the most. The one with a weak mind, strong back, teeth like baked beans and beady eyes that fit his ugly rat face.

He likes to call me kitten. I have a few choice names that I’d like to call him in return, but I always bite the inside of my cheek to resist the urge. Partly because I’d be whipped and partly because Miss Kara educated me and taught me all about manners. I realize that an educated wolf with manners might sound laughable. In my line of work, however, education and manners are as lethal as a bear trap to those I hunt. That’s how I lure my marks, how I bait my prey. A pretty face and good grace go a long way for a trained killer like me.

My glance wanders to my leg, the one peeking out from beneath my ratty blanket, and my eyes are drawn to the long jagged scar tracking the length of my calf. I grimace. Even with my education and manners, I never forget what I really am. I’m never allowed to.

“Hey kitten,” Lawrence says. Most would think the nickname is a play on my birth name, Pride. But I know it’s the handler’s way of cutting me down, to find control where he feels none. My parents called me Pride because I was their pride and joy. Lions live in a pride and since lions are cats…

He tosses a collar and chain into my cage. “Leash up.”

I take note of the gun in his holster before my glance locks on his. As I give him a good hard stare, he flinches. The movement is slight, but I notice it. Dressed in my knee length nightgown, long hair loose around my shoulders, I might look like an average seventeen-year-old girl—harmless and innocent—but we all know I’m not.

Even though Lawrence keeps his face blank and stares down at me with those dark eyes of his, he reeks of terror. The scent is like a mixture of hot sweat and rotting compost. Oh, it’s not pretty by any means. Nevertheless, the werewolf slumbering restlessly inside me feeds off his fear, thrives on it, so I inhale and draw it deep into my lungs.

Without taking my eyes off his, I take my time to leash up. My movements are slow and deliberate as I position the collar. Metal grinds metal and the sound cuts the silence as I secure it around my neck. The handler winces. So do the older, more obedient wolves that I bunk with.

Jace cuts me a glance, chocolate eyes now milky from old age warn me to behave. I realize he’s doing it for my own good, but this morning I’m cold and hungry and in no mood for Lawrence’s insults. Clover makes a noise to draw the handler’s attention away from me, and all sets of eyes shift to her.

As Clover tries to pacify Lawrence, averting her gaze in a show of respect and making small talk about the weather, Lawrence opens my mother’s former cage and pulls out her cot. He gives it a good hard shake and the breeze stirs the dust on the unfinished boards masquerading as our ceiling. The particles dance in the stairwell light before falling to the cold, cement floor.

When Lawrence tosses the cot into a corner I stiffen. It can only mean one thing. My mother has been gone for a little over a year now, and I know the master rarely keeps a cell empty for long, which makes me wonder when and how he’s going to fill it?

Who will he breed?

I cringe at the thought of bringing puppies into this world, but know it’s not something I have to worry about. The master would never breed a wolf like me. My mother always said I was a survivor, the only pup in a litter of three to make it, but hey, a runt is a runt. Thanks to Darwin and his theory of ‘natural selection’ a runt is a heritable trait that a pack can do without. When it comes to canine reproduction, only one motto dictates: runts need not apply.


Deep in the bowels of the estate’s basement, the master keeps other wolves, separating the strong and young from one another. I’m smart enough to understand that he distances us so we can’t conspire against him or speak telepathically. Wolves can only use telepathy when in animal form, however. Well, most wolves that is. Oddly enough, I along with Stone, an alpha wolf two years my senior, are able to communicate while in our human forms.
Sometimes the master does in-house breeding, sometimes he sends us out to one of his associates—other drug lords who also harbor werewolves. It’s like he’s running a regular old puppy mill in here. Except his puppies kill for him. Which begs the question, what does my master have in store for me today?
Check out www.catkalen.com

Where are you from?